Have you ever noticed that in so many places, the Bible seems to summarize people’s lives with a few sentences? Consider the following examples.

This is not an exhaustive list, and we see many more such statements throughout the Bible – especially if you read through Hebrews 11. All of these can be classified as positive and Godly testimonies of people’s lives.

However, there are also some quite negative ones throughout the Bible.

Even though these statements seem very brief, the lifespans of these people were anything but brief. Some of them lived to be 50, 60, or even 70 years old. However, in the grand scheme of things, in the time-scale of eternity, all they did and all they achieved throughout their earthly lives have been condensed down to a few sentences – some even just a few words.

Our lives on this earth can very much be viewed the same way. On the grand scale of eternity, the time we live on earth can be likened to “a mist that appears for a little while and then vanishes” – James 4:14 (NIV). And all that we do on earth may one day be summarized as a mere sentence on God’s wall of eternity.

But how do you think your life and my life will be summarized on that day? If God was to condense everything down to a single sentence, how would it read? Makes you wonder isn’t it?

Let me share a few examples from today’s world.

Once again, this is not an exhaustive list and we can come up with many more such examples from today’s world. However, on the grand scale of eternity, do you think any of these things would amount to anything? Do you think, in the life to come, anybody including God, would care how much money, status or popularity you had in this world? Personally I don’t think so. It is quite sad to say, but a life lived like that may very well be summarized as “the one who wasted his life”.

But don’t get me wrong here. There is nothing wrong with money, wealth, high positions, status and even popularity, if handled well. But if these things become our primary focus in life, then I feel there might be a problem.

Take king David as an example. He was a simple shepherd boy that got elevated to the position of a king. He received great honour and accumulated a lot of wealth. He even conquered many nations and was highly esteemed. But if we were to look closely into his life, what was the primary and the single most important thing he was known for? He was known for being a man after God’s own heart and his entire life was shaped by that. In fact, all those other things he had were a mere side benefit on his pursuit of God’s heart.

Also consider Joseph and Daniel from the old testament. They also received great honour, wealth and position. But once again, those things weren’t what they were known for.

Consider Daniel. He was the second in command for two of the world’s most prominent empires. However, the Bible doesn’t talk much about what he did or achieved in that position. However, it does emphasize greatly how Daniel from a very young age kept himself pure and remained faithful to God in the middle of a pagan and a corrupt nation.

Also consider Moses. According to history, he was the adopted grandson of the pharaoh and was raised in a palace for 40 years – most of us haven’t even lived that long. However, when we think about Moses, we don’t remember him for his position in the palace. But we remember him as the man who spoke with God face to face. His time in the palace seems insignificant and even inconsequential.

Let’s look at one last example (one of my favourites) – Enoch. His life of 365 years is simply summarized as “he walked with God” – Genesis 5:24(NIV). 365 years is a very long time – longer than what most of us can even comprehend. He must have done a lot of things and achieved a lot of things. However, in the grand scheme of things, the most important thing that was worth being mentioned was that “he walked with God”.

From the above examples, it should become apparent that what mattered the most about the lives of these people is how they related to God and their standing with God. All other things they had or accomplished were secondary.

So how will your life and my life will be summarized one day? Would we be known as friends of God? Or someone who walked with God? Or a man or woman after God’s own heart? What will your testimony be when you stand before God?

I feel it is important that we find out. I know that demands and responsibilities of life distracts us and takes our focus away easily from life’s big questions such as these. However, I feel it is important that we take the time every now and then to retrospect our lives; to review our journeys and see where we are headed. When the final curtain is drawn for our lives on this earth, would we stand before the throne of Christ to face a great deal of regret or would we be able to say like Paul said in 2 Timothy 4:7 (NIV) “I have fought the good fight, I have finished the race, I have kept the faith”.

We see from the scripture that Paul was a man who wholeheartedly pursued God’s purpose for his life. In fact, he confidently declares that for him “to live was Christ” – nothing else. He ran the race that he started with all diligence he could muster until he breathed his last. He didn’t just live that life for a while. He lived it until the end. In the same way, I think it is not enough that we live a life of a Godly testimony for a while. We need to do that until the end. We need to do that until we finish our race.

Take Judas as an example. He started off very well and lived a life of a Godly testimony for a while – a disciple of Jesus. I would say that he had a start much better than most of us. But he ended miserably. His journey with Christ started with a glorious end in mind, but ended miserably on the end of a rope. In fact, Jesus himself testified that “it would be better for him if he had not been born” – Matthew 26:24(NIV).

Take Terah, Abraham’s father’s life, as another example. He’s another person who started with one end in mind, but ended his journey with another. Genesis 11 (NIV) tells the story of how “Terah…set out…to go to Cannan”. But “Terah lived 205 years, and he died in Haran”. For reasons unknown to us, Terah set out for the Promised Land, but never made it. Perhaps on the way he settled for the safety and the comfort of Haran. He started his journey with one goal in mind and perhaps he was very committed to the journey when he began. After all, nobody sets out for a 600 mile journey on foot without some serious consideration. But he ended his journey never reaching that end goal. He barely even went quarter of the distance. Isn’t it quite sad? Perhaps, if he had gone all the way to Cannan, there may have been more written about his story in the Bible.

In a similar way, we all have started our journeys headed towards a glorious destination. It is a life of following Christ and at the end of it all, wanting and longing to hear those words “well done, good and faithful servant!…come and share your master’s happiness!” – Matthew 25:23 (NIV). Let us review our lives and make sure that we are still on that path. And more importantly, let us persevere to remain on that path until we hear those final words.

It says in Hebrews 12(NIV), “we are surrounded by such a great cloud of witnesses, let us throw off everything that hinders and the sin that so easily entangles. And let us run with perseverance the race marked out for us”. Let us derive encouragement from those that went before us – those great men and women of God. Let us hold firm and stick to the journey. As our pastor said during Friday’s Revelation study, “the one who stands firm to the end will be saved” – Matthew 24:13(NIV). It is not over yet and we are not there yet. 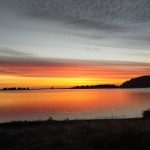